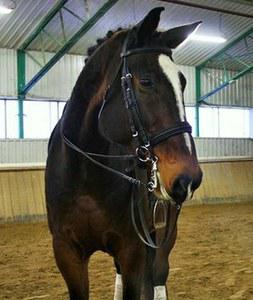 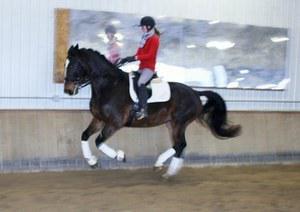 Details: This big gelding is easy to work with and can be ridden by anyone. He can either be for a professional YR/JR or Amateur. This horse has an amazing hind leg and is build uphill. Easy in the contact listens to your leg aids not bouncy and easy to ride off-property. Has some show experience. This geldings sire Olympic Ferro is a legendary dressage stallion. Olympic Ferro the Dutch sensation at Aachen competed at the 2000 Olympics and assisted his team in achieving a team silver medal with an individual score of 74.92%. As a three-year-old he was champion of his performance test at Ermelo where he achieved the outstanding results of 6.5âwalk 8.5âtrot and 8.5 canter. His sire Ulft is a son of the great Le Mexico who is listed 10th on the jumping index with 142 points. Le Mexico carries Furioso xx blood which brings value to any pedigree. Ferroâs dam Brenda is a daughter of the Holsteiner Farn who is listed sixth on the jumping index with 146 points. Farnâs son Nimmerdor is listed second on the jumping index with 155 points. Olympic Ferro sired the champion of the three-year-old stallions at sâHertogenbosch in 2000 and has nine young stallions in the second round there in 2001. The champion three year old mare at Ermelo in 2000 was an Olympic Ferro daughter. Much is expected of this charming talented black stallion who achieved the title of âKeurâ in 2000. He can be relied upon to produce beautiful typy talented offspring of the highest quality. Fantastic toplines and an elegant look characterize his get. In addition to their dressage excellence Olympic Ferroâs offspring also make good jumpers. Olympic Ferro is 1 on the BN World Stallion Rankings for dressage and is the top stallion and pride of the Netherlands affectionately known as the âBlack Pearl.â In 2002 Olympic Ferro once again had the highest scores on the Dutch Olympic team. (Source: http://www.superiorequinesires.com/stallâŠ/olympicferro.shtml) The dam of this gelding is Turania (Kelvin x Faldo). This mare has produced multiple FEI offspring most of them sold and showing as FEI horses. Her sire Kelvin is by the well-known stallion Flemmingh.