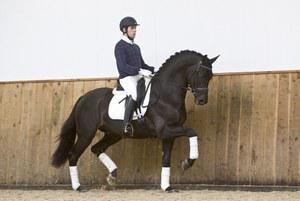 Details: Dale was a fully licenced and graded NRPS stallion leading to him be one of the four competitors to convince the committee to approval. Last year his owner gelded him through personal choice and no fault of his own. Dale was bought from Van Olst Horses in the Netherlands in 2012 for 600000 euros and last year went back for 4 months training there. Dale is uncomplicated to handle and ride with perfect ground manners but is reactive and responsive to your aids when ridden. He has been trained by the UKs top trainers Spencer Wilton and Michael Eilberg. This talented horse also hacks out and uses the water treadmill occasionally to broaden his fitness regime. He is currently UK Advanced Medium level in Holland they were playing with teaching him piaffe passage which he has proven to be more than capable of preforming to an above average standard which was of no surprise to anyone as this horse is a definite candidate for big tour dressage and an Olympic horse. This horse is ready to go out there and compete he has been used in demos gone to loads of Stallion Shows and qualifiers in massive stadiums of which he has behaved impeccably. Dale is everyones envy and is for sale only to the right home. Videos available upon request.